Cheesecake = Revelation? A meditation on Shavuot 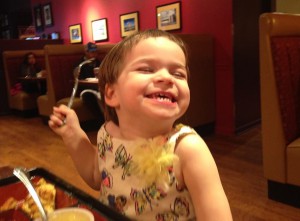 The author’s daughter shows how she feels about ice cream.

I always welcome the festival of Shavuot as it approaches. In my memory, Shavuot carries with it the delicious flavor of cheesecake and ice cream. As I watched the dates approaching on the calendar, I started to tell my three-year-old daughter about the upcoming festival:

Me: Shavuot is coming! It’s the holiday when we eat ice cream.

Her: Why do we eat ice cream on Shavoo?

I wracked my brain for what I could remember about the “Festival of Weeks.” I remembered a few things from my grad school days in Jewish studies:

But why is Shavuot associated with dairy? The memory bank came up empty, so I went into research mode.

I started with my go-to on the holidays, Seasons of Our Joy by Arthur Waskow. Rabbi Waskow wasn’t super helpful. In his section on “Customs of Shavuot,” he notes: “For reasons that are not altogether clear, the custom has arisen that milchig or dairy foods are especially prepared for Shavuot.” (I took some comfort in the fact that my blank stare in response to the three-year-old’s question is shared by such illustrious company.)

He goes on to make a few suggestions for the association, none of which are particularly satisfying (reference to “milk and honey” or speculation that those first generations who’d received the Torah were still figuring out how to cook with the new prohibition of mixing meat and dairy, so they ate only dairy).

Earlier in his explanation of the holiday, Waskow points out that in the Torah, Shavuot is an agricultural festival. It celebrates the spring growing season with offerings of the first fruits of the fields. Significantly, Waskow notes, the offering the priests make on behalf of the people is not the raw grains of the fields, but two loaves of bread. “Not grain, not sheep or lambs or goats, straight from God’s hand—but bread, mixed and kneaded and leavened and baked, is the distinctive offering of Shavuot. So Shavuot celebrates the partnership of human beings with God in giving food to the world.”

Waskow maintains that this partnership, symbolized by the bread, when overlain with the timing of the giving of the Torah, speaks to the relationship between humans and God in the process of Revelation. It supports the ancient rabbis’ understanding of Oral Torah, and the obligation we have to continue to “discover” Torah through our reading and interpretation of the written texts.

So, in ancient times, at Shavuot there was an implicit understanding that God made grain and humans improved it by baking bread. To the early rabbis, the cosmological analogy was that God wrote the Torah, but he expects us to continue to work with it and mold it into new forms (as we do with grain). We do so when we interpret, question, retell, and comment Oral Torah into existence.

This Shavuot, as I help myself to a healthy slice of cheesecake (and maybe a side of ice cream), I will explain to my daughter that we are celebrating the partnership between God and humans. God creates, and humans manipulate, use, and, in the case of cheesecake and ice cream, improve upon creation.

This year, Shavuot begins the evening of Saturday, May 23. If you’re interested in learning more about Shavuot, or any Jewish holiday, the Simon Family JCC can help. We’ll be your partner on your journey—wherever it leads (especially if it leads to cheesecake).

Tracie Guy-Decker is a freelance writer and artist.  She and her husband, a Navy Chief, and their three-year-old daughter share their home with two poorly behaved dogs and a six-toed cat. She can be reached at tracieguy@gmail.com.