Israel’s Solution to a Water-Starved World 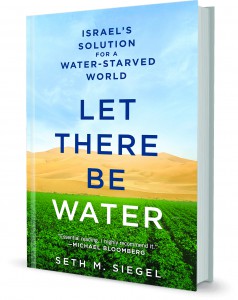 About three years ago, I learned that the world was on the cusp of a global water crisis. As a frequent visitor to Israel, I began wondering what impact this would have on a country that is 60 percent desert and a dry place everywhere else.

You can only imagine my surprise when I learned that not only wasn’t Israel headed for calamitous days when the water crisis descended but, rather, that Israel had a significant water surplus with which it could withstand even a ten-year drought.

Even more amazing, I realized that the world could learn from Israel and, if it acted fast enough, avoid the worst of what is coming.

With this knowledge in hand, I researched and wrote Let There Be Water: Israel’s Solution for a Water-Starved World, published in September by St. Martin’s Press.

Apparently, a lot of people are intrigued by the subject because within a few weeks of publication, the book appeared at #4 on the LA Times bestseller list and at #16 on one of the New York Times’ bestseller lists.

I’m now travelling all over the US telling the inspiring story about how Israel overcame seemingly insurmountable obstacles to achieve such water abundance that it gives water to the Palestinians in the West Bank and Gaza every day.

On Sunday, November 1st at 6:30 pm, to kick off the Lee and Bernard Jaffe * Family Jewish Book Festival at the JCC, I’ll be honored to share how Israel will be the solution to a water-starved world.

Let There Be Water may be unlike any other book about Israel you have ever read. It is a re-telling of the story of Israel through a resource: water.

The heroes of the story aren’t prime ministers or generals or soldiers, but visionaries who saw a problem and a solution decades before the rest of the world did.