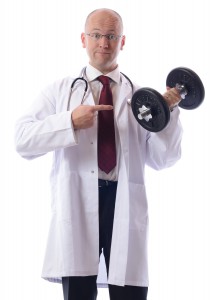 If there were a drug that reduced stress, fought depression, strengthened cardiovascular health, improved the quality of your sleep, and even helped you maintain a healthy weight, would you take it?

Sound too good to be true? It’s not; it exists, it’s very safe, and the side effects are minimal. No, it’s not a new product from Pfizer or Eli Lilly. It’s not under review by the FDA. You don’t even need a prescription to access it. It’s called regular exercise, and it can do all of those things and more.

Disappointed? Don’t be. If doctors could make a pill produce all of exercise’s positive effects, it would be a miracle cure. Exercise is not a pill, but it is a miracle cure. And it’s FREE!

According to the CDC, “about one in 10 Americans aged 12 and over takes antidepressant medication.” That statistic is hardly a surprise. According to one industry analyst, in 2010, the pharmaceutical industry spent $643 million in ads for antidepressants. (We’re not saying that “the man” is trying to keep you from exercising. We’re just noting that there’s a lot of money invested in those little bottles in our medicine cabinets.)

It’s true that there’s no way to know how many of the millions of people taking antidepressants are also exercising regularly, but with 80% of Americans not getting enough exercise, the odds are that they’re mostly not the same folks. It’s also highly likely that all of those antidepressant patients would benefit from some form of regular physical activity in addition to their pharmaceutical treatment—whether through structured gym time or more informal methods like walks, gardening, or even impromptu dance parties.

Even for people who aren’t feeling depressed, regular exercise can make you happier. When we exercise, our bodies release endorphins. These not-wholly-understood neurotransmitters are the body’s painkiller and reward system. They’re chemically related to opiates like heroin and morphine. Luckily for all us, far from street drugs, endorphins are naturally occurring, and ours for the taking.

So, would you take a drug that made you happier, and whose side effect was better overall health?

You can have that drug for free, but instead of quickly swallowing a pill, it takes you between 20 and 45 minutes to make it, and it’s best to do so at least three days a week.

Your fitness staff at the Simon Family JCC is here to help you make your miracle drug. Let us help you find the right form of exercise for you and keep you moving toward your goals. Get started today with your free three-day pass.