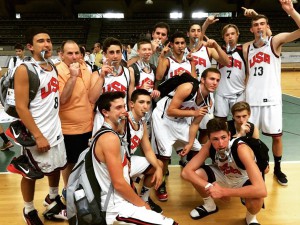 More than 2,000 Jewish athletes from 36 countries gathered at the Waldbühne in Berlin for the 2015 Maccabi games last month.  Three of those athletes— Jacob Konikoff, Evan Roesen, and Wayne Simon—represented the Tidewater community.

The games, which ran from July 27 to Aug. 5, feature 19 sports disciplines. Evan and Wayne brought their basketball skills to the court and earned gold medals while Jacob joined his teammates on the field for the soccer competition, playing five matches.

Evan and Wayne decided to represent the United States in the European Maccabi games after competing in the JCC Maccabi games in Detroit last summer.

“Wayne and I decided to apply, and we both earned a space in our age groups,” explained Evan.  “It only happens every two years, so it was really a once in a lifetime opportunity.”

That’s because the Maccabi games aren’t just about the sports. During the training camp prior to the trip to Germany, Wayne says he and his teammates really focused on the game, but once they arrived in Berlin, they bonded with other Jewish youth through trips, tours, and networking events. 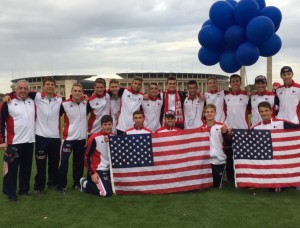 “Basketball took up several hours each day, but outside that I was able to meet people from all over the world. I learned about their lives, where our experiences differed and connected over common threads,” says Wayne.

Jacob echoed Wayne’s sentiments, “It was incredible to meet and spend time with other Jewish teens from all around the world. We had such similar interests even though we were all from different zip codes.”

During down time, participants enjoyed a performance by Matisyahu and toured different parts of Germany, including a sobering experience at Sachsenhausen concentration camp.

“I definitely recommend the JCC Maccabbi program as well as the national Maccabi program. If you have the opportunity, take it. Nowhere else will you have an experience quite like it,” explains Wayne.