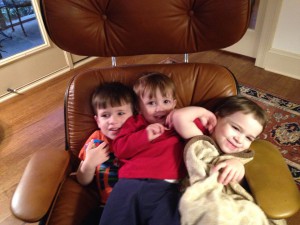 This morning, as I fried my umpteenth batch of matzo brei, my three-year-old daughter whined for the umpteenth time that she wanted a bagel.

I sighed quietly and flipped the brei, not even bothering to explain again about Passover to a toddler.  But it got me thinking.

I thought back to the Seder a few nights ago when we were entreated to imagine  ourselves as having left Egypt with the Exodus all those hundreds of years ago. I envisioned myself trying to serve the first matzo to a whining toddler. I wondered about the taste of that first matzo. Did the hasty escape from slavery–the mixture of triumph and terror–make it more or less tasty than the perfectly square staple of today’s Passover?

Then I remembered that the hasty escape did not afford those ancient mothers the luxury of eggs and butter, a hot frying pan, and the maple syrup that makes everything more palatable. I said a small prayer of gratitude.

I put the finished brei on a plastic plate, covered it with syrup, and called my daughter to the table to eat her “Passover pancakes.” As she tasted her first bite, my little one smiled up at me and said, “it’s good!” her missing bagel totally forgotten.

I smiled back and thought of all of the mothers, around the world and around the corner, who don’t have bagels or even matzo to feed their children. Again, I felt deeply grateful, and suddenly the words of the Seder, quoted from Exodus 22:20, came back to me full force: “You shall not wrong a stranger or oppress him, for you were strangers in the land of Egypt.”

Except in my mind, I heard my mother’s voice saying, “there but by the grace of God go I.” She’s been using that idiom for as long as I can remember, whenever she heard a sad story or saw a homeless person begging. She uses it as an admonishment when she hears someone being judgmental.

I’ve heard the phrase many, many times. There are some days where it resonates more than others. Passover provides days like that.

Don’t get me wrong, Passover can be a pain in the neck: all the preparation, all the toddler whining, all the things you cannot eat (and what you can eat, when consumed every day for eight days, is not good for the human digestive tract!). It’s uncomfortable.

Passover is a discomfort that we are asked to willingly adopt, though only temporarily. When we make the choice to accept the discomfort, we find, as the ancient Israelites did, that it also comes with great joy. Toddlers smile nearly as often as they whine. Families get together and laugh and argue and (hopefully) laugh again.

Passover helps us put into perspective our own and others’ discomfort. It helps teach us about just how beautifully complicated life can be—uncomfortable and joyful all at the same time. Passover reminds us how much we have every single day, and it asks us to be grateful.  It’s an important lesson for me, and one I hope to be able to impart to my daughter.

To all those who celebrate, I hope your Passover has been, and continues to be, a meaningful one. I, for one, am going to be very grateful for my chametz meal of pizza and beer on Saturday night.

If you’re interested in learning more about Passover or any Jewish holiday, the Simon Family JCC is here to be your partner on your journey.

Tracie Guy-Decker is a freelance writer and artist. She and her husband, a Navy Chief, and their almost-three-year-old daughter share their home with two poorly behaved dogs and a six-toed cat. She can be reached at tracieguy@gmail.com.