Part of the JCC Family 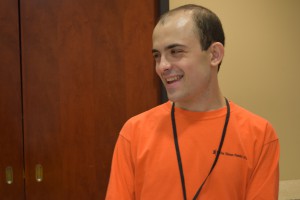 Daniel Hecht is autistic. You may see the 22-year-old washing, drying, and folding towels at the JCC, where he says he loves working.

“Everyone smiles at me and says hello,” he explains.

The JCC has been a part of Daniel’s life since he was two. Though he was not a typical toddler, the center welcomed Daniel and provided him an aide so he could attend preschool.

Years later, while in inclusion settings at school, Daniel wrote that he liked being with “real kids,” meaning typical kids, because he was part of the group—just like everyone else.

Daniel’s involvement at the JCC deepened during the summer months when his family helped Camp JCC staff set up an inclusion program.

As a part of the center’s commitment to inclusion at Camp JCC, they trained the staff and several aides to help special needs campers, but it was Daniel and his committed family that spurred the program.

Daniel started volunteering for the JCC towel service one day a week in the summer of 2010.

I am a man with autism, but that does not mean I am not able to do lots of things. There are some things I do better than people who aren’t autistic, but because it is hard to talk, people may not know that.

I help wash and dry lots of white towels for people to use. I have to pay close attention, so I fold them just right. Lots of people smile and say, “Thank you for working.” I like that the JCC needs my help.