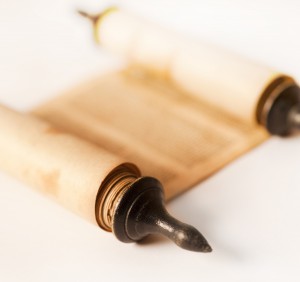 My sister’s voice on the other end of the phone line sounded anxious. “What should I do?” she said, “I really don’t want to screw this up.”

She was worrying about a session she was organizing for a professional conference, but she could just as easily have been seeking advice about being a parent, a wife, a friend, a citizen. In all of those cases my advice would’ve been the same: “No, Em, don’t worry about screwing it up. You will screw it up. Once you’ve accepted that idea, you can stop worrying about being a screw up, and get down to the business of making progress—not achieving perfection.”

This is advice that my sister and I give each other, in different words, back and forth, around all aspects of our lives.

My sister went on to lead a panel discussion at her conference. It was not perfect. She received some criticism and much praise from her colleagues. Because she’d already accepted the idea that she was “going to screw it up,” when the criticism came, she was able to hear it without defensiveness, accept it, and make plans with her critics for improving the future iterations of the session. As a result, she got even more praise for the way that she handled criticism.

The holiday(s) of Shemini Atzeret and Simchat Torah remind me a little bit of this exchange between us.

Literally, Shemini Atzeret means “Eighth Day of Assembly” or “Eighth Day of Completion.” Shemini Atzeret is, effectively, the eighth day of the seven-day festival of Sukkot. According to Arthur Waskow in Seasons of Our Joy, since we have festivals for Spring (Pesach), Summer (Shavuot), and Autumn (Sukkot), we need a winter festival. However, in the ancient Middle East, traveling to Jerusalem from the countryside in the winter was impractical and unsafe, “so the winter festival was placed immediately at the end of the fall festival, when the pilgrims were still at the Temple” (p 67).

Simchat Torah, or “Joy of the Torah,” is the second day of Shemini Atzeret, or the ninth day of Sukkot (except in Israel and among the Reform movement in the Diaspora, for whom the two are celebrated on the same day).

A joyful holiday, Simchat Torah is marked by singing and dancing with Torah scrolls. It is on Simchat Torah that the year-long cycle for reading the Torah resets. The parsha (or portion) of the week is the final chapters of Deuteronomy. The next to be read is the very first chapters of the first book of Genesis. It has become tradition to unroll the entire scroll to literally encircle the congregation, so that the last verse can be immediately followed by the first verse, from the same scroll.

It is the joy in the reset that reminds me of my sister’s and my understanding—and experience—that we are definitely going to screw it up. Like the accommodation of Shemini Atzeret (coming back for a winter festival is unrealistic, so we’ll tack it on the the autumn festival), by dancing and rejoicing at the reading of the verses containing Moses’ death and then the verses relating the creation of the world, we rejoice in the reality of progress, not perfection.

Rosh Hashanah and Yom Kippur invited us to sit with our misdeeds and our imperfections, to seek forgiveness, and to open ourselves to the suffering of others. Shemini Atzeret/Simchat Torah remind us that there are always do-overs, and that even though we’re going to screw it up, and will probably not reach the Promised Land, the journey is not only worthwhile, it is joyful.

This year, Shemini Atzeret begins at sundown on Sunday, October 4, and Simchat Torah ends at Sundown on Tuesday, October 6.

The Simon Family JCC can be a partner on your Jewish journey. Learn more about Jewish life and learning for all ages at the JCC.

Tracie Guy-Decker is a freelance writer and artist. She and her husband, a Navy Chief, and their three-year-old daughter share their home with a poorly behaved dog and a six-toed cat. She can be reached at tracieguy@gmail.com.